“During the turbulent time of the ’60s Isadore
was . . . the most meaningful voice that
connected black people and white people,”
former College of Charleston President Alex Sanders
told The State newspaper (at the time of Sen. Lourie’s death). 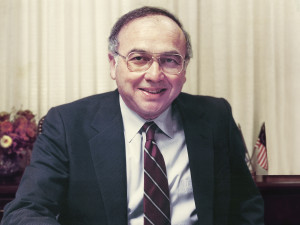 The Lourie Center is named in honor of the late Senator Isadore Lourie, who served in the South Carolina General Assembly from 1965 until 1993. He was well known for his work as a champion of the elderly, and contributed greatly to legislation and reform efforts for aging adults.

The late senator’s contributions include sponsoring legislation that established the State Commission on Aging, the Interagency Council on Aging, the Homestead Exemption, and the income exemption for the home bound elderly. He also led the way in establishing the South Carolina Permanent Improvement Program that built or renovated 72 Senior Centers in South Carolina.

“The highlight of my legislative career was those years when
I was active with the group called the Young Turks….
Through the efforts of this group and many others, we were able to be
responsible for progressive legislation in the fields of education,
senior citizens, consumer protection, economic development, health care,
and many other areas, all of which we believed and hoped would have
a lasting impression on the social progress of South Carolina.
Our commitment to the cause of social and economic justice for all of
our citizens was the anchor of our entire legislative program.”

Find out more about Isadore Lourie:

The Lourie Center is open year-round for classes. Please check our voice mail message, web site, and Facebook page for any updates or changes.

Weather-related closings will generally but not always reflect the City of Columbia and Richland One School system schedules.

An Accredited Center of Excellence